“If it takes long enough, it will be all right in the end”. On September 29th, 2021 the launch of ‘Making Her Mark’ could finally take off, after two-years of in-depth preparation. It was opened in Paisley, Renfrewshire, Fürth’s sister-city.

The presentation of 12 large, colorful boards was the creative result of a joint project by KAIROS Women +, Recovery Across Mental Health (RAMH), and the Glasgow Women’s Library (supported by Lil Brooks, a local social historian and artist).

In the summer of 2019 these groups came together asking themselves: Who are the unsung heroines of Renfrewshire, where can we find them and how are they celebrated or remembered? How are all women’s lives reflected in all Renfrewshire’s towns and villages?

They wanted to work with women so that they could learn new skills, and discover some of the stories of women in Renfrewshire’s past, turning these discoveries into an exhibition. 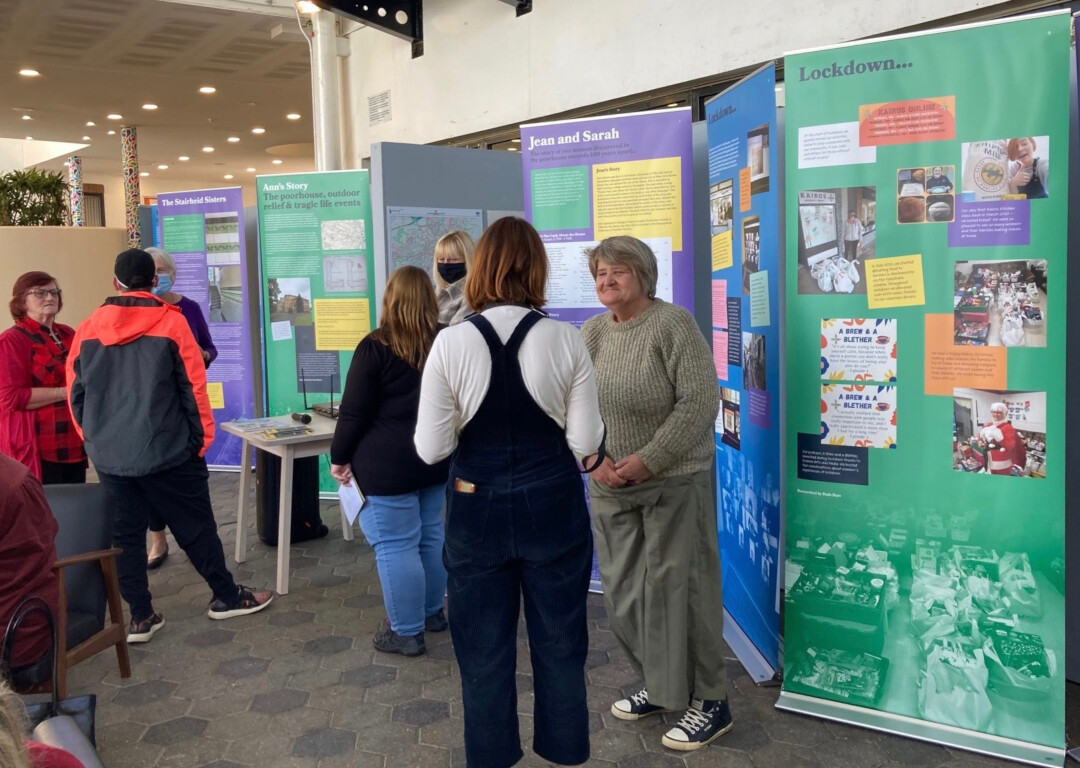 They re-discovered legendary Jane Arthur (1827-1907), social activist for women’s rights, and the first women to be elected Paisley’s school board in 1873. In addition, lesser known writers and artists, past and present, were presented.

Among them was Marion Bernstein (1846-1906). Born in London, she lived most of her life in Glasgow/Renfrewshire, supporting herself with piano lessons as well as writing, among others, for the Glasgow Weekly and the Weekly Mail. As a ‘radical feminist’ many of her poems were considered controversial, like her most famous one ‘Wanted: A husband’, which called for more equality in marriage. Longstanding health problems restricted her career, but she was nevertheless able to leave ‘her mark’ as a remarkable writer.

Jean Adams’ (1704) life was equally challenging. As head of a primary school in Cartsdyke, Renfrewshire, she was one of the first Scottish women poets to publish a volume of her poetry during her lifetime.“There’s Nae Luck about the House”, a song she created was considered to be “one of the most beautiful songs in the Scottish … language” by the famous poet Robert Burns. However, the authorship of it was long disputed in public, her poems did not sell. In 1765 she died in poverty at the poorhouse in Glasgow.

In 2006, aged 10, Chloe Nalwoga moved from Uganda to Renfrewshire. Her mother worried about racial harrassment, thus she was often not allowed to leave the house. In High School she had trouble understanding the Scottish slang, her own accent was made fun of. She retreated to the Art Department at her school, and found solace in writing and painting. “…so instead of making friends I was drawing” -which became her life’s passion. After successfully completing a Textile Design degree, she pursued interior textile design. In her artistc expressions she combines the Paisley patterns with African elements in order to honor both sides of her cultural up-bringing. Chloe Nalwoga was awarded the ‘Talent of the Year’ in 2019 at the  ‘Surface Design Awards Show’ in London.

Last, but not least, Paisley is known for another famous contemporary woman, Mhairi Black, MP. At age 20, she was overwhelmingly elected as Member of Parliament representing the Scottish National Party, and became the youngest politician in the House of Commons.

‘Making Her Mark’ was inspired by a similar remembrance project that was launched in 2018 by the Women’s Museum in Fürth, and visited by Morag Smith from the Glasgow Women’s Library.

As part of the exhibition ("Wie weiblich ist die Stadt? Fürth und die Partnerstädte"), it was the museum’s intention to look for the stories behind the female street signs in its city, and present them to a greater public. This idea was incorporated into ‘Making Her Mark’ as an interactive installation. The visitors could suggest women of Paisley and Renfrewshire who deserve to be honored with a street sign.

KAIROS Women+ is a community-led women’s space based in Renfrewshire believing in the power of collaborative decision-making, bringing women and non-binary people together to influence their community as active, engaged citizens. KAIROS offers workshops, courses, and groups to implement change.

RAMH supports people across Renfrewshire county in their recovery from mental ill health, and empowers them to build independent, full lives.

After October 14th 2021, the exhibition will be shown in Jonestone, Renfrewshire, at the Glasgow Women’s Library, and at the Paisley museum after reopening.

back to "blog"
back to "home"
to the exhibition "Wie weiblich ist die Stadt? Fürth und die Partnerstädte" (EN)
to MUSEUM ONLINE