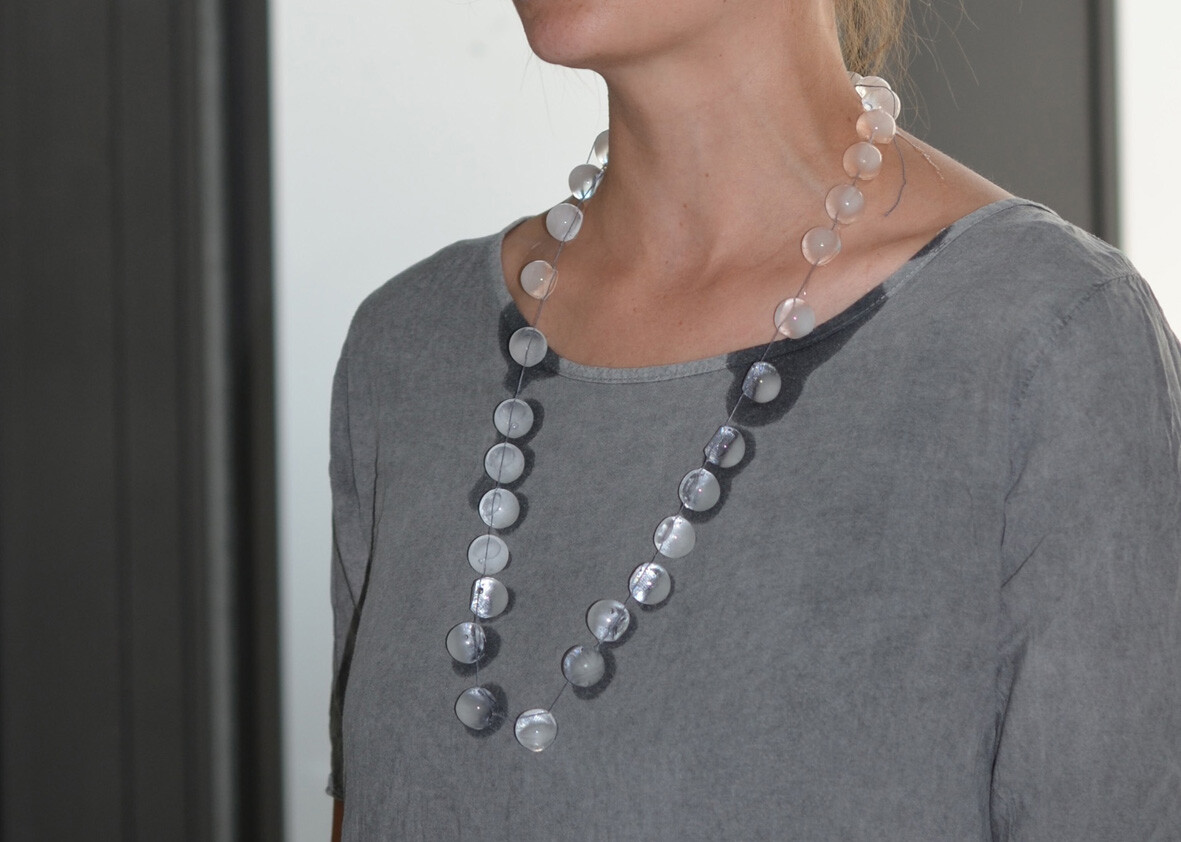 I first heard about the art object "Eiskette" in a conversation about the annual exhibition 2019 at the Kunstakademie Nürnberg .
At that time, we were looking for female artists whose work could fit into the exhibition "Technik#Weiblich#Logisch".
My ears perked up.

About wearing a “Chain of Ice”.

On the exhibition’s opening night, Rosanna v. Angerer, a student in a class called "Jewelry and Appliance," wore the Chain of Ice. She described her appearance with the chain as a performative process: She stood in the room, silent and motionless. Only ice balls of her chain were in motion. Attentive viewers could observe how -- in interaction with her body heat -- the ice balls around her neck and on her body slowly melted, liquefied and gradually spread in the form of wet spots on her T-shirt.

In conventional understanding, the art of gold- and silversmithing generally goes hand in hand with the creation of valuable pieces of jewelry and artefacts with permanent inherent value.

By contrast, Rosanna v. Angerer created "Chain of Ice" with water, experimenting with the malleable properties of the liquid - solidification, melting, evaporation. To meditate on her work, she uses performance art, which creates an area of experience -- in both spatial and temporal terms -- between the rapidly dissolving object (the chain melts in about half an hour), her own physical senses, and her audience’s perception.

Since I got my first glimpse of "Ice Chain," it has seemed to me to achieve a very sensitive and touching deepening, which, in contrast to value creation through the accumulation of property, contains the value conceptualized as "sustainability."

Transforming the concept of “value”

Despite its short duration, the performance represents for me a form of deceleration, which makes the visualization of "melting ice" a conscious and personal experience.

Similar to the way Rosanna v. Angerer describes it, I can feel the ice melting and the warming of my own body, combined with a certain kind of loss of time and sadness in the microcosm of my own body, even if in a very aesthetic way.

"look into your own eyes"
a moment only with yourself, whether for self-reflection or out of pure biological interest ... an analog VR glasses.
© Photo: Wilfried Petzi

Rosanna v. Angerer lives and works in Erlangen;
She studies at the Academy of Fine Arts in Nuremberg;
training as a silversmith;
vocational school for glass and jewelry, Neugablonz;
v.angererrosanna (instagram)